This year is the 25th anniversary of Peter Gabriel’s influential album “So”.  I can’t believe it was 25 years ago that I blared “In Your Eyes” through my car stereo, dove into Anne Sexton’s poetry because of “Mercy Street”, and simultaneously tapped my feet and crinkled my forehead in wonder at the strangeness of “Excellent Birds”.   The duet with Kate Bush “Don’t Give Up” spoke to me then, but only in a whisper.  And now 25 years later, the song calls out to me in a way I can’t ignore.

At the Sisters Song Academy a couple years ago, my friend Chris Kokesh and I had the idea to perform this song with the great Peter Mulvey singing the Kate Bush part.  He sang it low and his gravelly voice gave us chills.  The final awesome touch was Patrick Pearsall playing bad-ass bass.  We performed the song at the Sunday morning community celebration and it felt like a giant wave rushing over me.

I have played it many times now since that day.   Sometimes by myself, sometimes enlisting the help of friends.   It speaks to me now because of these tough times when all are struggling.  It speaks to me now as I struggle to survive and maintain the artist’s life.  Every time I sing it, the song acts like a balm, a pep-talk, and a dose of adrenalin straight to my heart.  “Don’t give up, don’t give up, don’t give up”, and I almost believe we can make it good, that there’s a place where we belong.

Posted under: News, Speak To Me, Videos by Beth 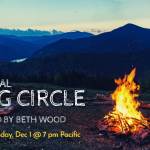